Design Holidays are delighted to announce that our Abama Resort in Tenerife has been awarded another Michelin star for 2014, please see our latest press release dated 28.11.2013.

The Ritz Carlton’s Abama Golf & Spa Resort, Tenerife, has been honoured with a third Michelin star by the 2014 Michelin Guide for Spain and Portugal, reviewed this week.  The star is the second to be awarded to M.B., the Canary Island outpost of renowned Basque chef Martin Berasategui, adding to the resort’s Michelin stable now comprising two Michelin rated restaurants with a total of three stars. The resort is also delighted to announce that its Japanese fusion restaurant, Abama Kabuki, has retained its star awarded in 2012 for the 2013 guide. This new accolade further strengthens Abama’s reputation for gastronomic excellence standing as the only resort in the Spain offering a total of three Michelin stars.

Under the direction of Chef Martin Berasategui, and the leadership of Berasategui’s Executive Chef Erlantz Gorostiza, in line with the Michelin star definitions, M.B. has been accredited for its excellent cuisine worth the detour.

The 32 year old Chef Erlantz Gorostiza’s training included many years with Berasategui at Restaurante Lasarte including a period working at El Celler de Can Roca with Paco Torreblanca, hailed as one of the most innovative pastry chefs in the world. Gorostiza has since continued to develop his own exceptional culinary style and standards adding his own innovative twists to the menu at M.B.  The Basque chef has worked as the Culinary Chef and Gastronomy Director since 2010.

Basque-born, Berasategui’s all consuming passion for cooking began early in his life, growing up in and around his parents’ restaurant Bodegón Alejandro, one of San Sebastian’s culinary institutions. In the years to follow the chef won the restaurant its first Michelin star and has now received a total of seven stars at his restaurants across the globe. Berasategui’s inspired interpretations of gourmet cuisine have made him a household name throughout Spain and the rest of the world.

Taking creative ownership of M.B., the elegant ocean-facing outpost at Abama Golf & Spa Resort, Berasategui achieved his first Michelin star for the restaurant in 2010. The 2014 Michelin Guide for Spain and Portugal continues to recognize the gourmet destination’s exceptional gastronomic standards both by retaining this star and awarding a second.

Abama Kabuki, the Canary Island outpost of the Madrid-born Japanese fusion concept was awarded its first Michelin star in 2013 under the direction of 28 year old Executive Chef Daniel Franco based on the quality, mastery of technique, personality and consistency of its food. The restaurant is delighted to retain its star for the 2014 guide.

Canarian Chef Franco worked at Abama Kabuki since its launch in 2006 under the supervision of Rafael Carrasco and Kabuki’s founder Ricardo Sanz. In 2010 Franco’s extraordinary talent secured him the position of Executive Chef.

The Kabuki concept was launched by Chef Ricardo Sanz in 2000 with Kabuki Restaurant in Madrid. The concept was a result of the chef’s creative culinary development of tapas combined with his training by Japanese culinary master Masao Kikuchi of the legendary Tokyo Taro Restaurant. Ricardo Sanz opened a second Kabuki outpost – Abama Kabuki – in 2006 followed by a third back in Madrid in 2007 – Kabuki Wellington and a fourth in Marbella in 2013.

What we say: ‘We are delighted to both announce and congratulate our Abama Resort in Tenerife for the award of their 3rd Michelin star for 2014. This award not only reflects the quality of both the Abama Resort and it’s restaurants, but also the incredibly hard work put in by head chef Martin Berasategui and his team.’ Says Johnny Barr Director and co founder of Design Holidays 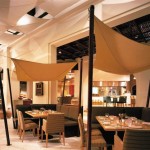