Luxury Resorts for Half Term Holidays

One of our most commonly asked questions we have at Design Holidays is which of our resorts are hot enough  for a family and which one/s we would reccommend for a Half Term Luxury Holiday Break ?

A: As Half Term breaks invariably tend to be for the cooler months i.e February / May / October we always suggest to look at the warmer resorts such as Tenerife.

Suggested resorts that we would reccommend highly in Tenerife include the 5 star Abama Resort with a family of 4 staying from £2562 for 7 nights in Half Term. 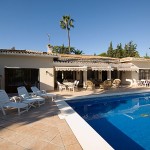