Ever wanted to holiday at La Manga, but looking for a little culture also ?

If so then Design Holidays have found the perfect cultural trip to add on to your La Manga holiday. Only 15 minutes from La Manga lies the historical city of Cartagena with it’s magical ‘reasons to visit.’

This maritime city was already known to the Carthaginians and Romans, and its name today comes from the Latin name, Cartago Nova. Cartagena was under Arab domination until Ferdinand III the Saint reconquered it and incorporated it into the kingdom of Castile. Cartagena’s port played a key role in the War of Succession and the Peninsular Wars.

Visit the site and view the oldest / first Submarine in the world.

(Our director Johnny Barr visits the Roman Theatre in Cartagena with Eric Ure from Blue & Green Marketing Consultants to look at the viability of La Manga Cultural holidays to Cartagena 13.12.11)

The rich Carthaginian heritage extends as far as the shores of its marina. The Sea Wall, built by Charles III in the 18th century, delimits the old quarter. Overlooking the Mediterranean there are two elements which are clearly connected with the sea: the prototype of the submarine by the inventor Isaac Peral, a native of Cartagena, and the National Museum of Maritime Archaeology. This museum on the Navidad dock is also home to the National Centre of Underwater Archaeological Research. The findings on display reveal aspects of naval construction, trade and navigation from ancient times.

The entrance to the city centre is dominated by the Town Hall, a gem of modernist architecture dating from the early 20th century. The Old Cathedral is located on the Camino del Parque Torres (behind the Muralla del Mar wall). This is the oldest place of worship in CartagenaCartagena (13th century), and it stands on the remains of a Roman Theatre discovered in 1987. This construction dates from the first century A.D., and together with the theatre in Mérida, is one of the most important in Spain. The items found on this site can be seen in the Museum of the Roman Theatre.

Other examples of Roman splendour to be seen in the city are the remains of the amphitheatre (in the bull ring), the archaeological site of El Molinete, the Morería Baja colonnade and the Byzantine Wall, which despite its name is also Roman. Particularly worth mentioning are the Augusteum and the Decumanus. The first contains the remains of the old forum, whose importance as a public building can be seen from the luxurious marble floors on display at the site. The second contains the foundations of a porticoed area with a Roman road which links the port with the forum, and with an area of thermal baths. The Casa Fortuna, built in the first century B.C. and belonging to a wealthy family, shows what daily life was like at the time of the Roman Empire.

The Torres park is the site of the Concepción castle. Raised on a hill, it served as a fortress for Carthaginians, Romans, Visigoths, Arabs and Castilians. Indeed the city has always had numerous defensive military buildings. A good example is the Navidad Fortress, built in the mid-19th century and today the Visitor Centre for the Defensive Architecture of Cartagena and the Mediterranean. Also worth visiting is the Refuge – Civil War museum, a series of galleries which were used as protection from aerial attack throughout the conflict.

The best way to discover the Modernist architecture of Cartagena is to take a walk along the Calle Mayor, which leads off the Plaza del Ayuntamiento square, and the surrounding area. Here visitors will find the houses of Cervantes and Llagostera, by the Cartagena architect Victor Beltrí, with their characteristic glassed-in balconies, worked in iron with bronze reliefs of allegorical figures. Other representative buildings of this artistic movement include the Casino, the Gran Hotel, the railway station,  and the houses of Maestre and Dorda, all elegant monuments to the bourgeoisie which remain as evidence of the area’s economic development, based on mining and industry, in the late 19th and early 20th centuries. Aristocratic buildings included the palaces of Aguirre and Pedreño, the first in the Modernist style and the second in the neoclassical style.

The Punic Wall stands on Monte Aletes, one of the five hills surrounding Cartagena. This is the location of the Visitor Centre for this site, dating from the third century B.C..

Adjoining the historic walled centre is the Military Arsenal, whose construction was concluded during the reign of Charles III. The walls here have the only entrance gateway which still stands in the city. Also related with the history of Cartagena is the Naval Museum, on the outskirts of the modern city, containing an exhibition of old ship’s navigation instruments, maps and navigation charts, as well as models of ships of all kinds. The fishing quarter of Santa Lucía is also well worth visiting.

The city of Cartagena also has a variety of key cultural events each year such as the world music festival known as the “La Mar de Músicas” (Sea of Music).

What we say : ‘ Design Holidays clients tend to find the allure of Cartagena more and more with each year as Cartagena becomes more and more aware of how to present it’s tourism. On a recent visit I was shown the fabulous Roman amiptheatre in the heart of Cartagena and finished with the most incredible lunch at La Catedral restaurant overlooking the Roman Theatre. This restaurant is so unique that the floors are made of glass to show the Roman remains below , which was the most fabulous dining experience I have ever had in Spain.’ says Johnny Barr Director & co founder of Design Holidays.

For more information on our La Manga Holidays with culture, please visit our website or contact our specialist La Manga booking team on 01444 87 22 00 / enquiries@designholidays.co.uk 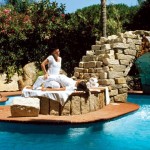