With Wimbledon, Strawberries and the UK Summer rainy season finally upon us,  now is the time where our whole nation becomes obsessed with tennis.

With every Tennis Club and park full to the brim of budding Rafa’s , Andy’s & Roger’s – why not head off on a tennis holiday and play tennis in the sun ?

At Design Holidays our heritage in tennis holidays is second to none as we were formed in 1994 specifically to sell tennis holidays at La Manga Club , Spain to the growing UK tennis market by our co founder and current director – ex Scottish Tennis player Johnny Barr.

We are always asked to suggest our best tennis holiday resort and the answer is still the same 17 years later in that La Manga Club, Spain with 28 tennis courts and 13 resident professionals still remains Europe’s number 1 tennis resort ! 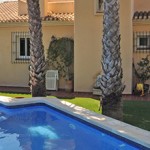