Stay at the La Manga Hotel in South East Spain and enjoy winter sun from as little as £52 per room per night – exclusive to www.designholidays.co.uk 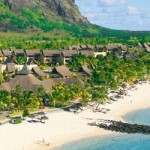